From our archives, originally posted in March 2006.

Matt Kennedy’s wonderful meditation on Romans 8:1 so encouraged me last night. And then, shortly afterwards, I came across this wonderful poem / hymn by John Donne while browsing online. For those frustrated by their sins this Lent, feeling powerless, wondering how God can forgive yet again, be reminded “He hast done” and be encouraged by following truths and promises of Scripture and the beautiful hymn of John Donne.

Eph 1:7-8
In [Christ] we have redemption through his blood, the forgiveness of sins, in accordance with the riches of God’s grace that he lavished on us with all wisdom and understanding.

Col 1:13-14, 21-22
For he has rescued us from the dominion of darkness and brought us into the kingdom of the Son he loves, in whom we have redemption, the forgiveness of sins. […] Once you were alienated from God and were enemies in your minds because of your evil behavior. But now he has reconciled you by Christ’s physical body through death to present you holy in his sight, without blemish and free from accusation…

Heb 9:28
… so Christ was sacrificed once to take away the sins of many people; and he will appear a second time, not to bear sin, but to bring salvation to those who are waiting for him.

I Jn 1:9
If we confess our sins, he is faithful and just and will forgive us our sins and purify us from all unrighteousness.
—–

A HYMN TO GOD THE FATHER.
by John Donne

The tune for the following hymn is here. Several versions of the hymn are also available for download at iTunes or Amazon, for instance this version at iTunes from the album Harmonia Sacra & Divine Anthems.

WILT Thou forgive that sin where I begun, 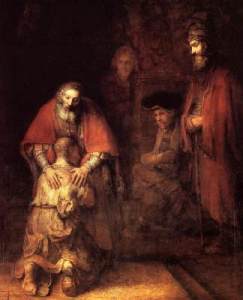 Which was my sin, though it were done before?
Wilt Thou forgive that sin, through which I run,
And do run still, though still I do deplore?
When Thou hast done, Thou hast not done,
For I have more.

I have a sin of fear, that when I have spun
My last thread, I shall perish on the shore ;
But swear by Thyself, that at my death Thy Son
Shall shine as he shines now, and heretofore ;
And having done that, Thou hast done ;
I fear no more.

— art credit: Rembrandt, The Return of the Prodigal Son, 1669 – from the web gallery of art

This entry was posted on Friday, March 20th, 2009 at 10:09 am and is filed under Adoration, Anglican Heritage, Devotional, From our Archives, Illustrated Devotionals, Lent, Lent & Beyond Favorites, Lent Devotionals, Lent Music / Lent Hymns, Poems, Hymns and Songs, Repentance. You can follow any responses to this entry through the RSS 2.0 feed. You can leave a response, or trackback from your own site.

2 Responses to Encouagement for Lent: John Donne’s Wilt Thou Forgive?