Bethel means House of God.
Gilgal means the reproach of Egypt being removed by the act of mass circumcision or circle of standing stones.
Mizpah means watch-tower; the look-out.
Ramah means the height or high place of God.

O Lord,
Would that the praise of my lips create a throne for You and the circumcision of my heart allow me to draw nearer to You, that I may gaze upon Your holiness and enter Your presence. Amen.

Help, LORD, for the godly man ceases! For the faithful disappear from among the sons of men. (Psalm 12:1)
LORD, raise up godly leaders and teachers throughout the Episcopal Church. Thank you for the faithful sheherds you have raised up in this diocese.

They speak idly everyone with his neighbor; with flattering lips and a double heart they speak. (Psalm 12: 2)
Jesus, cleanse the seminaries of the Episcopal Church of all idle speech and false teaching. Thank you for the faithful witness of Nashotah House and Trimity School for Ministry.

May the LORD cut off all flattering lips, and the tongue that speaks proud things, (Psalm 12:3)
Father, shut the mouths of all those who speak flattering and proud things. Bless the words of your faithful witnesses.

Who have said, “With our tongue we will prevail; our lips are our own; who is LORD over us?” (Psalm 12:4)
Holy Spirit, there so many lawless and lordless people among us. Help them know their need for Jesus.

“For the oppression of the poor, for the sighing of the needy, now I will arise,” says the LORD; “I will set him in the safety for which he yearns.” (Psalm 12:5)
Lord, you taught David how to be a faithful shepherd and rescue his sheep from the mouth of the lion and the bear. Please raise up faithful shepherds in our day who will resuce the poor and the need out of the clutches of those who would consume them.

The words of the LORD are pure words, like silver tried in a furnace of earth, purified seven times. (Psalm 12:6)
Holy Spirit, write your words on our hearts and minds. Help us daily walk by the light of your word.

You shall keep them, O LORD, you shall preserve them from this generation forever. (Psalm 12:7)
Jesus, preserve us and protect us.

The wicked prowl on every side, when vileness is exalted among the sons of men. (Psalm 12:8 ) 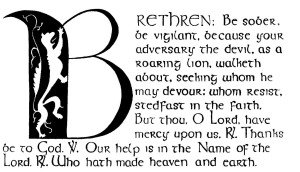 A word received: Keep turning to me. I can do what you cannot.

STUDY GUIDE: SUNDAY SCHOOL LESSON 11, December 4, 2011
Theme Verse: 19Consequently, you are no longer foreigners and aliens, but fellow citizens with God’s people and members of God’s household, 20built on the foundation of the apostles and prophets, with Christ Jesus himself as the chief cornerstone. 21In him the whole building is joined together and rises to become a holy temple in the Lord. 22And in him you too are being built together to become a dwelling in which God lives by his Spirit. (Ephesians 2:19-22)
Readings: Mark 1:1-8; 2 Peter 3:8-18; Isaiah 40:1-11; Psalm 85
Memory Verse: He gives power to the weak, and to those who have no might He increases strength. Even the youths shall faint and be weary, and the young men shall utterly fall, but those who wait on the LORD shall renew their strength; they shall mount up with wings like eagles, they shall run and not be weary, they shall walk and not faint. (Isaiah 40:29-31)
Next Week: John 1:6-8, 18-28; 1 Thessalonians 5:12-28; Isaiah 65:17-25; Psalm 126

A word received: I want to build you into the church I want. I AM the foundation and cornerstone. Look to me — let me build you up by my Holy Spirit and my word.

A word received: Remember all those witnesses that pointed to me in your lives as John did in his time. Who are you pointing to me? Look around you; ask for the guidance and power and fire of my Holy Spirit to do this.

“My times are in your hands.” (Psalm 31:15a) (verse 8-9) A word received: I want you to use my gift of time to you to build up my kingdom. Don’t be distracted as you wait for my timing of events. Keep your eyes on me. Pray for ears to hear my word to you so that your heart will be ready.

(verse 10-11) A word received: Pray that I will come into your heart now. I long to carry you in my arms as a lamb of my flock. I will lead you. I AM faithful.

A word received: I want you to see from verse 12 that verses 10 and 11 are what I give. They are not by your good works, but by my mercy and love.

Received from one of our readers–

O Lord Jesus Christ, who art adored by the holy angels in heaven, yet dost deign to receive the praises of thy Church on earth: We bless thy name for this news of your protection and grace; and pray that through it the hearts of all who hear this report may be refreshed, and uplifted to thy throne in heaven; who livest and reignest with the Father and the Holy Spirit, ever one God, world without end.

Then Jesus went into the temple of God and drove out all those who bought and sold in the temple, and overturned the tables of the money changers and the seats of those who sold doves. And He said to them, “It is written, ‘My house shall be called a house of prayer,’ but you have made it a ‘den of thieves.’” (Matthew 21:12-13)
Lord Jesus, it is so easy to get sidetracked by money raising bazaars and projects; restore to our common life in this diocese a clear understanding of the holiness of your sanctuary. Let every parish in this diocese become a house of prayer.

Then the blind and the lame came to Him in the temple, and He healed them. (Matthew 21:14)
Holy Spirit, move in the healing ministry throughout this diocese: give sight to the blind and restore mobility to the lame. Thank you.

But when the chief priests and scribes saw the wonderful things that He did, and the children crying out in the temple and saying, “Hosanna to the Son of David!” they were indignant and said to Him, “Do You hear what these are saying?” And Jesus said to them, “Yes. Have you never read, ‘Out of the mouth of babes and nursing infants you have perfected praise’?” (Matthew 21:15-16)
Father, please help us praise Jesus as we ought and teach and encourage the youth and children in our parishes to do the same.

Holy Spirit, anoint and guide all those who are planning and preparing for the Diocesan Convention in June. Bring revival and healing to this diocese. Thank you.

Notes from the Front Line

***** Date: Mon, 28 Nov 2011
From: Nigel Mumford
Subject: Daily quote
The Shepherd leads his sheep to still water. (Psalm 23) Why? Because sheep, like us, like to drink from still water so water does not go up their nose! Allow the Lord, the Shepard of your soul to guide you to still waters.

***** Date: Mon, 28 Nov 2011
From: Nigel Mumford
Subject: Daily quote
Is it faith healing or faith in God to heal? Who needs to have faith, the person who is sick or the prayer team. The onus is on the prayer team. I know someone who was in a coma for three weeks and could not pray. The prayer of the faithful pulled him through! He is alive today because of a mighty prayer team. Thank you and thank you God.

From the Front Lines |

Joshua 2:10-11 (NIV)
We have heard how the LORD dried up the water of the Red Sea for you when you came out of Egypt, and what you did to Sihon and Og, the two kings of the Amorites east of the Jordan, whom you completely destroyed. When we heard of it, our hearts melted in fear and everyone’s courage failed because of you, for the LORD your God is God in heaven above and on the earth below.

Lord, You are indeed God in heaven above and on earth below. You are King of kings and Lord of lords.
Rahab acknowledged Your greatness, and You delivered her and her family from destruction. You have delivered Bishop Lawrence from the deposition charges, and we thank You.
Rahab tied a scarlet cord in the window of the city wall. Should the angel of death look down upon the Episcopal Diocese of South Carolina through an unseen portal, let the vision of the Blood of the Lamb applied to the faithful and their homes and churches and businesses and vehicles melt his heart in fear. The fibers of Rahab’s cord (interlacing, twisting pennants of red, overlapping and knotted at the window) were a token of salvation for her, her family, and all that they had. We apply the Blood of Jesus Christ as a token for the Episcopal Diocese of South Carolina. Amen.

Simon Peter, a bondservant and apostle of Jesus Christ, To those who have obtained like precious faith with us by the righteousness of our God and Savior Jesus Christ: (2 Peter 1:1)
Father, thank you for the apostolic witness of Peter and Paul and the others Jesus called to this ministry. Do not remove the ancient landmark. (Proverbs 23:10a) Do not let anyone remove the ancient landmarks of scriptural teaching in this diocese. Help us hold steady to your word and the apostolic witness. Bless and anoint the witness of your apostles among us today:
Bill Love
Dan Herzog
David Ball
David Bena
Harold Miller
Mike Chapman
Mark Lawrence
And others.

as his divine power has given to us all things that pertain to life and godliness, through the knowledge of him who called us by glory and virtue, (2 Peter 1:3)
Jesus, help us daily answer your call to glory and virtue.

by which have been given to us exceedingly great and precious promises, that through these you may be partakers of the divine nature, having escaped the corruption that is in the world through lust. (2 Peter 1:4)
Jesus, help us daily reflect on your promises to us and the hope we have in your resurrection.

A word received: Allow the little children to come to me and forbid them not.
Lord, speak to those congregations where order is more important to them than allowing children to be there in the service with their noise and confusion.