“When the Son of Man comes in his glory, and all the holy angels with him, then he will sit on the throne of his glory.” (Matthew 25:31)
Jesus, thank you that week by week we get glimpses of your glory in the bread and the wine. Thank you for inviting us to the wedding feast.

“All the nations will be gathered before him, and he will separate them one from another, as a shepherd divides his sheep from the goats. And he will set the sheep on his right hand, but the goats on the left.” (Matthew 25:32-33)
Holy Spirit, please help the leaders and teachers and people of the Episcopal Church and of this nation know that we are but men and that you will judge us and separate us at the end.

“Then the King will say to those on his right hand, ‘Come, you blessed of My Father, inherit the kingdom prepared for you from the foundation of the world:” (Matthew 25:34)

For as many as are led by the Spirit of God, these are sons of God. For you did not receive the spirit of bondage again to fear, but you received the Spirit of adoption by whom we cry out, “Abba, Father.” (Romans 8:14-15)

Jesus, we long to hear your words of blessing.

Father, thank you for giving us your Spirit of adoption so that we can know you as our father.

“for I was hungry and you gave me food; I was thirsty and you gave me drink; I was a stranger and you took me in; I was naked and you clothed me; I was sick and you visited me; I was in prison and you came to me.'” (Matthew 25:35-36)
Holy Spirit, please give us eyes to see and hearts to respond to those in need. Help us hear and see the hungry, the thirsty, the stranger, the naked, the sick, and those in prison.

“Then the righteous will answer him, saying, ‘Lord, when did we see you hungry and feed you, or thirsty and give you drink?” (Matthew 25:37)

But we are all like an unclean thing, and all our righteousnesses are like filthy rags; we all fade as a leaf, and our iniquities, like the wind, have taken us away. (Isaiah 64:6)

Father, we have no righteousness of our own — ours is as filthy rags in your sight. Thank you for the righteousness you give us through the blood of your son Jesus.

What does it profit, my brethren, if someone says he has faith but does not have works? Can faith save him? If a brother or sister is naked and destitute of daily food, and one of you says to them, “Depart in peace, be warmed and filled,” but you do not give them the things which are needed for the body, what does it profit? Thus also faith by itself, if it does not have works, is dead. But someone will say, “You have faith, and I have works.” Show me your faith without your works, and I will show you my faith by my works. (James 2:14-18 )

Father, mold us by your hands so that we will see and hear the lost and the least.

“And the King will answer and say to them, ‘Assuredly, I say to you, inasmuch as you did it to one of the least of these my brethren, you did it to me.'” (Matthew 25:40)
Jesus, please help us daily be doers of your word, and not hearers only. (See James 1:22) Help us daily show forth our faith in you by the works we do. Bring us to the obedience that comes from true faith in you. Thank you. 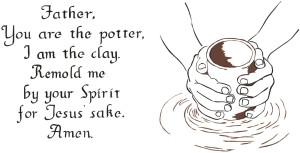 A word received: I want to build you into the church I want. I AM the foundation and cornerstone. Look to me — let me build you up by my Holy Spirit and my word.

A word received: Look to Mary as a model of obedience.

A word received: I AM able to establish you on the firm foundation of my son, Jesus.

A word received: My word is true and every word of it shall find fulfillment. Look to me, read my word.

(verse 12) A word received: Look at the obedience that is called for here. Look at Mary and see the fruit of obedience.

Notes from the Front Line

***** Date: Fri, 16 Dec 2011
From: Nigel Mumford
Subject: Daily quote…
Pray for the people who surround you today. Look at there faces, look at the back of their heads as they pass you or stand in front of you and really pray. I am doing that right now as I sit on an airplane behind a woman who has lost all her hair… cancer?

*****. Date: Fri, 16 Dec 2011
From: Lauren Corley
Subject: Need Christian Healing Ministries Alumni Help in Rochester, NY
Hello New York Alumni,
I received a request from a fellow CHM School of Healing Prayer participant. Her name is Amy O’ Neil and I have copied her on this email. Her nephew was recently in a car accident in Rochester, NY. Amy was hoping there were CHM alumni in or near the Rochester area who would be able to meet pray with her nephew. Does anyone live near Rochester or know of anyone trained through CHM in that area?
Your help is most appreciated! Merry Christmas! Blessings, Lauren Corley
Executive Assistant to Francis MacNutt
Christian Healing Ministries, Inc.
(904) 765-3332 ext. 211

***** Date: Fri, 16 Dec 2011
From: Nigelmumford
Subject: My friend Canon Andrew White is commended in the House of Lords. Baroness Cox is mentioned in the article.
Dear friends,
LORDS DEBATING PLIGHT OF CHRISTIANS IN MIDDLE EAST REPEATEDLY COMMEND WORK OF CANON ANDREW WHITE.
On Friday, an entire day in the House of Lords was devoted to discussing the plight of Christians in the Middle East. A total of nine of their Lordships praised the work of Canon Andrew White in their speeches.
FRRME Director, Peter Marsden, listened to the debate.
The debate was introduced by the Archbishop of Canterbury, Rowan Williams with the words; “My Lords, many people these days have a short and skewed historical memory. It is all too easy to go along with the assumption that Christianity is an import to the Middle East rather than an export from it.”
I couldn’t help but think of Andrew’s comic descriptions of “The miserable evangelists to Iraq”, Jonah and Doubting Thomas. Iraq has indeed a long history of worshipping the God of Abraham, Isaac and Jacob.
Lord Mackay was first to respond, saying:
“Today I want particularly to mention the position of Canon Andrew White as the vicar of Baghdad. He has played a very important part in maintaining Christian witness in Iraq under extremely difficult circumstances.”
Speaking of time spent with Andrew in Israel, he recalled, “I have to say that the relationships he had with people from right across the community were very remarkable. He has shown in more recent times a fine example of Christian fortitude in the troubles that now beset Iraq.
“I wish particularly to pay tribute to Andrew White’s work and I hope that he will be able to continue for a long time in his office.”
This was greeted with cries of “Hear! Hear!” from the 80 Lords in the chamber.
Lord Patten urged both their Lordships and the Government to act in response to religious persecution, saying, “There can be no walking on the other side of this road, even in the Palace of Westminster. I hope that our secular leaders in the coalition will restate religious freedom as a human right.”
Lord Turnberg and Lord Palmer commended Andrew’s work, Lord Alton spoke of his “indomitable spirit and incredible courage” and Baroness Cox paid tribute to “his magnificent work in Iraq, especially in improving interfaith relations”.
Lord Carey praised Andrew’s “remarkable work [as] one of the key players in the Alexandria Declaration” bringing together parties for the religious track of the Israel Palestine peace process. He went on to state that Andrew “is currently making a powerful contribution to harmony in Iraq and the Middle East.”
Lord Hylton spoke at length about “my friend Canon Andrew White” and the work with the High Council of Religious Leaders in Iraq. “Lives have undoubtedly been saved as a result.”
The Minister of State, Lord Howell, stated that, in the view of the Government, religious freedom is a basic human right. He confirmed Government support for the Alexandria Declaration and “the High Council of Religious Leaders in Iraq, which seeks to bring together religious leaders and combat sectarian violence, and of course to continue the invaluable work of Canon Andrew White.”
Lord Howell concluded:
I end my comments by saying that, unlike Mr Richard Dawkins, I have faith in the faiths. We will continue to highlight and condemn all instances of violence and discrimination against individuals because of their beliefs, wherever they occur.
Archbishop Rowan Williams wound up the debate by thanking their Lordships for their high calibre contributions to the debate and observed, “Not the least among those was the admiration widely expressed for the work of Canon Andrew White in Baghdad, and I am happy to associate myself with that admiration.”
When I spoke with Andrew afterwards, he said:
“It was wonderful that the House of Lords debated this issue and took seriously the plight of Christians in the Middle East. What really matters is that we must make sure that the political world gets behind the religious means of working at reconciliation. This is the only hope for all minorities in the Middle East.”
In characteristic form, he went on to talk about his beloved St George’s.
“As usual, this Sunday was wonderful here in Baghdad. On Saturday we were joined by four very important people from “Open Doors” in Holland. They are one of the world’s foremost charities serving persecuted Christians across the globe.
“Unfortunately, despite having visas from the Iraqi Embassy in Holland they were refused entry to Iraq and were threatened with deportation. As soon as we heard this we immediately started liaising with the government at the highest level. Three hours later we got them in.
“We have worked very hard with Open Doors in the last two days, dining with Yonadam Kanna and Sargon Slewa the two highest Iraqi Government Christians and meeting other religious and political leaders. They were so surprised and delighted to see how developed our church complex was, with its clinic, school and Mothers Union. This was highlighted even more when we paid visits to other churches which unfortunately have very limited facilities.
“To me, it just demonstrated how incredibly blessed we are by the Almighty and how we all totally rely on Him.”
Wishing you every blessing, Peter Marsden, Director, The Foundation for Relief and Reconciliation in the Middle East (FRRME)

This entry was posted on Saturday, December 17th, 2011 at 1:11 pm and is filed under From the Front Lines, Word Received. You can follow any responses to this entry through the RSS 2.0 feed. You can leave a response, or trackback from your own site.