Anglican Bishop John Guernsey, head of ACNA’s Diocese of the Mid Atlantic, has written a wonderful pastoral letter in which he calls for prayer for the Ebola outbreak in West Africa.

Bishop Guernsey lived and worked in Liberia many years ago, so his letter brings a personal perspective to this crisis.

I write simply to urge you to join me in prayer, and not simply because Ebola has reached America.
You may find it helpful to use the prayer resources at Pray to End Ebola and daily prayer guides at the Lent and Beyond prayer blog.
Let’s be faithful to our calling to pray earnestly for our brothers and sisters across the globe, continuing to pray for persecuted Christians in the Middle East, and praying now for those facing the scourge of Ebola.
“May the God who walks with us through the valley of the shadow of death so that we
may fear no evil, may this God turn His face towards us and by His power and wisdom
guiding all those involved, bring an end to the spread of Ebola. May He bring many who
live without the knowledge of Jesus into relationship with Him. This we pray in the
Name of Jesus Christ our Lord. Amen.”  -from Pray to End Ebola

We thank Bp, Guernsey for his link to Lent & Beyond.  We’re so glad we’ve been able to play a part in helping mobilize prayer during this Ebola outbreak.

Note:  You can find our list of 14 key leaders to pray for regarding the Ebola crisis here.  The list includes government leaders, UN, WHO, NGOs, Missions groups.. 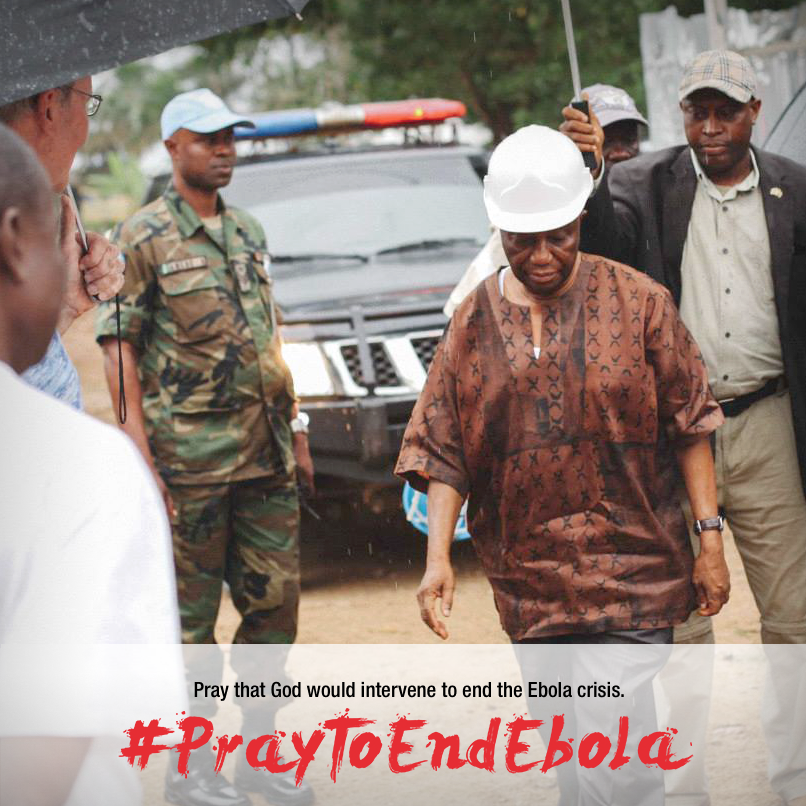 Thank you for joining believers around the world in a seven-day call to prayer for the end of the Ebola crisis in West Africa.

Today is DAY FIVE of #praytoendebola, a full week of focused prayer. Please pray today individually, with a friend, in groups, as families, and as an entire Church:

Pray that God would intervene to end the Ebola crisis. Also, pray that government officials and decision makers in the Ebola crisis would mobilize resources quickly and effectively.

With more than 6,500 cases of Ebola confirmed and over 3,100 who have died, the crisis has been devastating to the people of West Africa. But God can intervene!

“Do not be anxious about anything, but in everything by prayer and supplication with thanksgiving let your requests be made known to God. And the peace of God, which surpasses all understanding, will guard your hearts and your minds in Christ Jesus.” (Philippians 4:6-7 NIV)

Please share this entire prayer effort with your church members and fellow believers by every means possible.

Updated prayer requests and other resources can be found at www.praytoendebola.org. Log on today to let us know your church is standing with us in prayer! Pass the word along! #praytoendebola

IMPORTANT UPDATE:  Since publishing the post below, it has become clear based on reports from the CDC and the WHO that much of the apparent decrease in cases in Liberia is due to the reporting system being totally overwhelmed.  In most areas, especially the capital, Monrovia, there is no decrease.  In one district, the Lofa district, however, it appears the decrease may be for real.  Keep pressing on in prayer... it is SO needed!

The latest WHO report (October 3) on the Ebola Outbreak in West Africa is out.

However, there may be some good news.  It is way too early to be sure, as there are always fluctuations and there may be reporting issues or patients staying away from treatment centers.  But the rate of new cases in Liberia appears to have dramatically decreased.

Let’s look at some numbers:

That’s a pretty dramatic decrease in new cases! LA Times reporter Robyn Dixon is providing amazing reporting from the Ebola frontlines in Liberia.  (I very much encourage people to read her stories.  They are helping me to feel connected and to pray.) Her October 1 article “A Whisper of Hope…” also provides some anecdotal evidence to believe that there may be some slowing of the rate of new cases in Libera, although overall the situation remains desperate.

Praise God for this decrease and pray the rate of new cases continues to decline sharply in Liberia, and begins to fall in Sierra Leone, where the number of new cases has been continuing to rise over the past weeks.  (The rate of new cases in Guinea are remaining fairly stable at an average of about 18 new cases per day).

Most merciful Father, we continue to cry out to You for the people of Liberia, Sierra Leone and Guinea.  Have mercy upon them and bring an end to this plague of Ebola.  Thank you for the slowing rate of new cases in Liberia.  May those numbers continue to drop and may we be surprised by how quickly the outbreak ends.  What seems impossible to us is possible for You.  Help us to trust You and continue to give all who are fighting this disease much wisdom, strength and grace.  Amen.