#PraytoendEbola – Day 7: Pray for those who don’t know Jesus 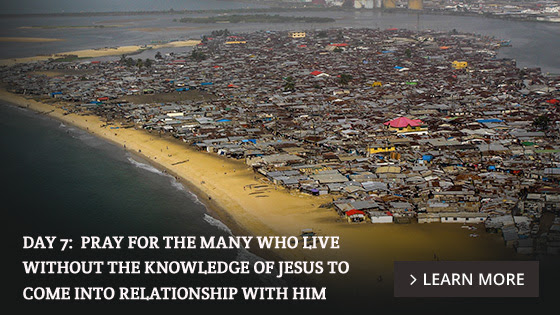 via email from SIM

On this final day of our week of focused and united prayer for the end of the Ebola crisis in West Africa, we are asking believers in Churches around the world to set aside time for prayer.

As you gather for worship:

Pray that God would intervene to end the Ebola crisis. Also, pray that those who live without knowledge of Jesus in the West Africa region impacted by Ebola would hear of Him and respond to His love for them.

Since the outbreak began in early 2014, more than 6,500 cases of Ebola have been confirmed. More than 3,100 people have died, and the crisis continues. Infections from the Ebola epidemic in Liberia, Guinea and Sierra Leone could soar to 1.4 million cases by mid-January according to new estimates released last week by the U.S. Centers for Disease Control and Prevention.

Though this situation seems desperate and frightening, God is in control. “Again, truly I tell you that if two of you on earth agree about anything they ask for, it will be done for them by my Father in heaven. For where two or three gather in my name, there am I with them.” (Matthew 18:19-20 NIV) We can trust Him to intervene with loving care.

Please share this entire prayer effort with your church members and fellow believers by every means possible.

Updated prayer requests and other resources can be found at www.praytoendebola.org. Log on today to let us know your church is standing with us in prayer! Pass the word along! #praytoendebola

Colossians 1:19-20 (ESV)
For in him all the fullness of God was pleased to dwell, and through him to reconcile to himself all things, whether on earth or in heaven, making peace by the blood of his cross.

Christ Jesus,
You are sovereign and supreme over Guinea, Liberia, and Sierra Leone. By the blood of Your cross, You reconcile Yourself to all things, in heaven and on earth. We cry out for Your perfect reconciliation in the unseen realms and in the natural world of these nations.
Peace, Lord! No Ebola. No fear. No chaos. Your kingdom come, Your will be done. Peace! Peace! Peace! Amen.