One of our followers on Twitter, Mark Daniels, recently posted an Easter reflection on the unusual ending of the Gospel of Mark.  I found it very striking and thought provoking.  I’m posting a few excerpts.  FYI:  This is written in the format of a preacher’s dialog with the Lord about his sermon as he wrestled with the text of Mark 16:1-8 (the abrubt ending…):

“But it seemed too good to be true to the women,” I answered. […] I went on, caught up with enthusiasm: “They were trying to take it all in and they had come in contact with one of Your messengers, luminescent with Your holiness and Your splendor. And…”

“And they had to decide whether they believed or not.

“Did they believe that the One they had seen crucified was risen or not?

“Did they believe that through Jesus, the power of sin and death over our eternal lives was erased?

“They must have rifled through their memories and remembered all of the times that Jesus had healed diseases, cast out demons, and raised from the dead, exercising power for others and never for Himself, power that only God possesses.

“They must have remembered all the times He had promised–in promises that seemed so strange to them at the time He made them–that He would be raised from death by God the Father after having suffered the rejection of the world.

“As they ran from the tomb, the women’s ecstasy must have transformed from bewilderment to awe-filled joy!

“Jesus, dead on Good Friday, was now risen and alive and on the march on Easter Sunday.

“So, why, Lord” I asked, “does the gospel of Mark leave things like this at the tomb…with the women fearful and in awe and processing what they’ve heard and trying to decide?”

“Because, Mark,” God replied patiently, “that’s where most of the people of the world are right now.

“Most Christians believe, but can’t decide whether to share what they believe with others. They’re afraid.

“And the rest of the world has heard something of Easter, but hasn’t decided whether to believe–to trust–or not.

“Your job and the job of every Christian is to keep telling others about Jesus–by your words and by your actions–so that they can follow the Jesus they can’t yet see into My bright eternity, where they will see Him always and ever…where sin and death will be distant memories, where all hurts will be forever healed, where love and power will envelop the saints, where every tear will be dried, and where you will live with joy and certainty and purpose forever and ever.

“Everything depended on the women telling others. And they did. If they hadn’t, you might not be celebrating Easter this year…or any year.”

What decision will you and I make?

Or will we remain silent?

(emphasis of the last 4 lines added)

The full entry “Your Easter Decision” is here. 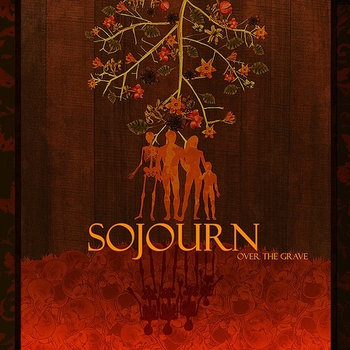 The Easter music I’ve chosen for today is one of the best contemporary songs in my Easter playlist, Warrior by the Louisville, KY based group Sojourn. The combination of the words and the great musicianship – a blend of jazz and rock – make it so powerful.

I only discovered Sojourn in 2013.  This is from their album Over the Grave, released in 2009. I also love the songs Over Death and We Are Changed from this same album, and Good Day from the 2011 EP The War.  All of these are 5 star songs in my Easter playlist.

The songs on this album are inspired by hymns written by Isaac Watts:

In the midst of the Reformation in England, Isaac Watts recognized that people needed to see the gospel in the psalms and hymns of the church, and they needed to sing them in language and metaphors that they understood. In this, he became not only the father of the modern hymn, but the pace-setter for contextualizing the gospel for the people of God.

As musicians, pastors and songwriters, our desire was to explore the hundreds of hymns that Watts wrote during his lifetime, to learn from the incredible range and depth of his lyrics, and to re-envision those songs with modern language and melodies. In particular, we gravitated towards themes that seem unfortunately absent in modern worship — themes about God’s wrath and judgment, His righteousness, and a dramatic vision of the cross and atonement of Christ.

This CD is the first installment of the Isaac Watts Project: songs inspired by and adapted from his hymns. The record was written and performed entirely by musicians from Sojourn Community Church — 35 in all. It is our hope that this project, like Watts’s hymns, will point us beyond the music and lyrics to see the glorious Savior who inspires them.

You can find all of Sojourn’s music at their bandcamp page.

David rejoiced in God alone
He was raised by grace to an earthly throne
But Christ the son demands our praise
For His kingdom has no end of daysLord, you rejoice in victory
When another lost soul bows to its knee
Rising tide of righteousness
With the shield of truth upon your breast

Honor and majesty divine
Around his sacred temple shine
Grace and might so long foretold
In crowns of glory, not of gold

Earth and sea will give up their dead
The nations gathered before him
A day of glory, a day of dread
No one dares now ignore him

I found a Chord Sheet here.  I post the lyrics and chord sheet for edification and as a resource, but please respect copyright and purchase the song if you’ll be using and sharing it.
By the way, Project Gutenberg has a number of free downloads of Isaac Watts works available…

Prime Minister Benjamin Netanyahu is facing the challenge of forming a coalition government.

I will make justice the measuring line and righteousness the level; Then hail will sweep away the refuge of lies and the waters will overflow the secret place (Isaiah 28:17).

Our Father in heaven,

You are the God of Abraham, Isaac, and Jacob.  You promised that they would be a great people, and You promised them the land of Israel.  We thank You for the favor the nation of Israel has received.

We bless Prime Minister Netanyahu and the leaders of Israel.  Bring them into the formation of a government capable of meeting the challenges ahead–a government that has justice as its measuring line and righteousness as the level.

Guard and protect the Prime Minister and his family, we pray.  Amen.

From the News, Prayer for Nations | Tagged: Israel |