One of the Advent Series I am most excited about is Anglican priest and poet Malcolm Guite’s series for Advent 2015.  He’ll be reading an Advent poem from his Advent poetry anthology “Waiting on the Word” each day.

Here’s the text of the poem, which I found here.

Source: The Poetical Works of Christina Georgina Rossetti, with a Memoir and Notes by William Michael Rossetti (1904), page 156

BEHOLD, the Bridegroom cometh: go ye out
With lighted lamps and garlands round about
To meet Him in a rapture with a shout.

It may be at the midnight, black as pitch,
Earth shall cast up her poor, cast up her rich.

It may be at the crowing of the cock
Earth shall upheave her depth, uproot her rock.

For lo, the Bridegroom fetcheth home the Bride:
His Hands are Hands she knows, she knows His Side.

Like pure Rebekah at the appointed place,
Veiled, she unveils her face to meet His Face.

Like great Queen Esther in her triumphing,
She triumphs in the Presence of her King.

His Eyes are as a Dove’s, and she’s Dove-eyed;
He knows His lovely mirror, sister, Bride.

He speaks with Dove-voice of exceeding love,
And she with love-voice of an answering Dove.

Behold, the Bridegroom cometh: go we out
With lamps ablaze and garlands round about
To meet Him in a rapture with a shout.

Each day’s poetry reading is accompanied by a beautiful illustration by Lancia Smith.  Here’s her image to accompany today’s poem: Another post dug up from our 2006 archives…, an Advent favorite that I’m surprised has taken me 8 years to post over here at this version of Lent & Beyond!

My former hopes are fled,
My terror now begins;
I feel, alas! that I am dead
In trespasses and sins.
Ah, whither shall I fly?
I hear the thunder roar;
The Law proclaims Destruction nigh,
And Vengeance at the door.
When I review my ways,
I dread impending doom:
But sure a friendly whisper says,
“Flee from the wrath to come.”
I see, or think I see,
A glimmering from afar;
A beam of day, that shines for me,
To save me from despair.
Forerunner of the sun,
It marks the pilgrim’s way;
I’ll gaze upon it while I run,
And watch the rising day.

An Advent Poem – The Curse Undone, by Teresa Roberts Johnson

I posted the first poem in this two poem series yesterday.  This is from Teresa Roberts Johnson’s poetry blog, Angliverse.

Hiding their faces from the evening sun,
They stood ashamed among the shuddering trees
And heard the bidding voice of God, the One
Whose judgment brought the sinners to their knees.

“You will give life, but mingled with deep woe,”
He said to Eve, who sold her children into war
With him who on his belly now must go,
His fangs poised for destruction near and far.

To Adam, careless watchman, God then said,
“And you will earn your food by toil and sweat,
The dirt shall thwart your quest for daily bread,
While children doomed for death you shall beget.”

But of the woman’s pain a Seed would come
Just at the moment of earth’s darkest night.
This promised Seed to sin could not succumb,
The Second Adam, who all wrongs would right.

For He would freely give Himself for food,
The Bread of Life to take the curse away.
His agony the grieving world renewed
As death gave way to life at break of day.

Please click here for the poet’s notes and commentary on the poem.

An Advent Poem: The Advent of Grace by Teresa Roberts Johnson

Anglican poet Teresa Roberts Johnson has two wonderful original Advent poems at her blog Angliverse this year.  They are theologically rich soul food and I’ve enjoyed meditating on them.  Here is the first poem.  I will post the second tomorrow.   Please make sure to click on the link at the end to read Theresa’s information on what inspired the poem.

The Advent of Grace

The sibilant voice poured pride into her soul
While her protector, silent, shirked his role.
The perfect garden at her feet, Eve reached
To pluck forbidden fruit, and thus she breached
The kind decree that promised life and breath,
And opened up her home to pain and death.
For when she said, “Take, eat,” and Adam took,
The curse unfurled, and seas and mountains shook.
Their stolen meal brought famine yet unknown,
Dearth earned for taking what is God’s alone.
The outlaws hid, believing all was lost,
Their eyes now open to the dreadful cost
Of plundering God’s throne, for with that hand
They had instead laid waste to Earth’s fair land.
Still worse, they had estranged themselves from Love,
But God took pity on them from above.
At His appointed time, His Word rang out
To say, “Where are you?” and to bring about
Undoing of the curse that fell upon their head,
Of pain in birth and sweat poured out for bread.
The garden lay in ruins many a year,
Till Advent bells rang out unbridled cheer.
For the power and the glory man had sought
Rest in the Man whose blood their lives has bought.
He freely left His throne to seek and save
The lost; God’s Son was traded for the knave.

Please click here for some commentary on the poem.

I’m hoping to post one or two Advent poems each week.

This poem by Christina Rossetti is probably my favorite Advent poem.  I love its focus on holding tight to the promise that the bridegroom will come even though there are no evident signs of His appearing.  May the Lord strengthen our hope in His promises, our longing for His return, and grant us a persevering and trusting faith, even in the darkest nights of our souls. 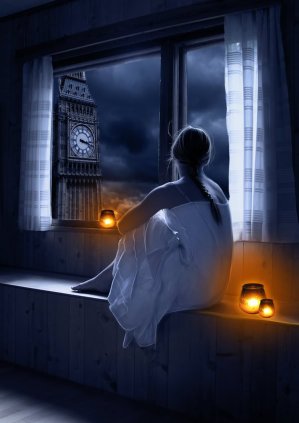 These Advent nights are very long;
Our lamps have burned year after year,
And still their flame is strong.

‘Watchman, what of the night?’ we cry,
Heartsick with hope deferred:
‘No speaking signs are in the sky’,
Is still the watchman’s word.

One to another hear them speak,
The patient virgins wise:
Surely He is not far to seek,
All night we watch and rise.

The days are evil looking back,
The coming days are dim,
Yet count we not His promise slack,
But watch and wait for Him.

Weeping we hold him fast tonight,
We will not let Him go
Till daybreak smite our wearied sight,
And summer smite the snow:

Then figs shall bud, and dove with dove
Shall coo the livelong day;
Then He shall say ‘Arise, my love,
My fair one, come away!’

The Advent moon shines cold and clear.
We watch and wait.

Artwork Credit:  A Servant of the Lord blog

UPDATE:  There is a wonderful choral rendition of this poem at YouTube.

The Rev. Patrick Comerford’s reflection on T.S. Eliot’s poem “A Song for Simeon”

Must reading at Patrick Comerford’s blog: A Song for Simeon instead of  Nunc Dimittis at Evening Prayer

It’s a wonderful and informative reflection on both Simeon’s song (Luke 2:29-32) and T.S. Eliot’s poem “A Song for Simeon.”  Here’s an excerpt:

In this poem, Eliot confines his comments on things of the past to four lines in the second stanza. In contrast to Journey of the Magi, which concentrates more on a physical journey, Eliot here places his emphasis on the time that has been spent making an inner journey of faith:

I have walked many years in this city,
Kept faith and fast, provided for the poor,
Have given and taken honour and ease.

We are aware too, that Simeon is very old. He is hanging on, waiting for God’s promise, so that he can die:

My life is light, waiting for the death wind,
Like a feather on the back of my hand.

Just as Eliot had his inner searches and wanderings, in which he moved about from one place to another. The difficulties with his wife Vivien’s illness contributed to a separation and the complete breakdown of their marriage, adding to Eliot’s sense of disillusion with life. In both these poems, Eliot focuses on an event that brings about the end of an old order and the beginning of a new one.

Eliot structures A Song for Simeon around lines from the prayer spoken by the priest Simeon as recorded in Luke 2: 29-32:

Master, now you are dismissing
Your servant in peace,
according to your word;
for my eyes have seen your salvation …

Simeon too was a witness. Although he was not present at Christ’s birth, he witnessed the presentation of the Christ-child when he was brought by his parents to the Temple as an eight-day-old. Yet Simeon did more than just witness the child, “Simeon took him in his arms” (Luke 2: 28) as he prayed. In his blind faith, he comes to hold the Body of Christ, and to see the child for who he really is. As Joseph and Nicodemus do when they take him down from the Cross, and as we do at the Eucharist, he becomes a bearer of Christ as he holds the Body of Christ in his hands and so becomes too part of the Body of Christ at one and the same time.

Three times in the poem, Simeon asks for peace. Is he referring to the peace that will come with his own death? Or the peace of Christ that passes all understanding?

The poem can be read as a song for Simeon to sing, or as a song to be sung for Simeon. We can imagine ourselves listening to Simeon’s prophetic voice, or imagine the voice of a poet singing on Simeon’s behalf or in his honour at a later age, from a viewpoint and with insights denied to Simeon himself.

Go read it all!

Behold a silly tender Babe, in freezing winter night;
In homely manger trembling lies, alas a piteous sight:
The inns are full, no man will yield this little Pilgrim bed,
But forced He is with silly beasts, in crib to shroud His head.
Despise Him not for lying there, first what He is enquire:
An orient pearl is often found, in depth of dirty mire;
Weigh not His crib, His wooden dish, nor beasts that by Him feed:
Weigh not His mother’s poor attire, nor Joseph’s simple weed.
This stable is a Prince’s court, the crib His chair of state:
The beasts are parcel of His pomp, the wooden dish His plate.
The persons in that poor attire, His royal liveries wear,
The Prince Himself is come from heaven, this pomp is prized there.
With joy approach, O Christian wight, do homage to thy King,
And highly prize this humble pomp, which He from heaven doth bring.